Introducing Our Next Principal 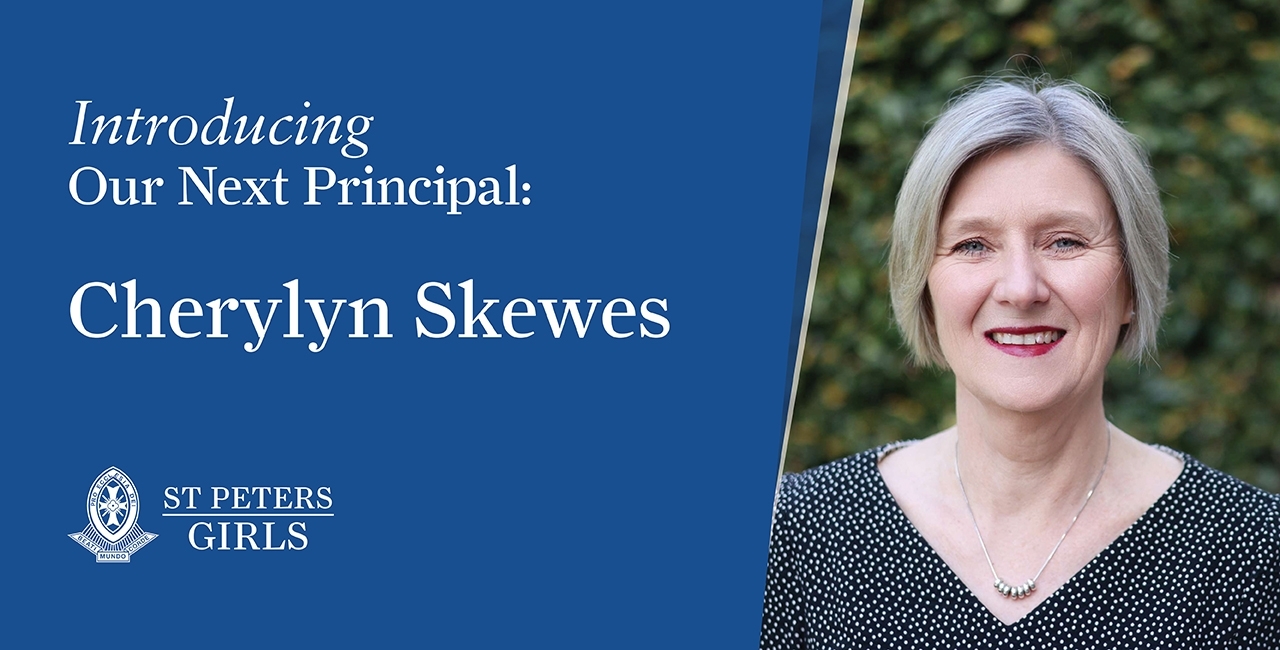 On behalf of the Board of Governors, it is my great honour to announce the appointment of our next Principal of St Peter’s Girls’ School: Ms Cherylyn Skewes.

Cherylyn has a wealth of educational and leadership experience from ELC to Senior School in both Adelaide and Melbourne. She holds a Master of Education (Curriculum and Administration Studies) and is a graduate of the Australian Institute of Company Directors. With core teaching expertise in Years 7 - 12 English and German, Cherylyn’s career journey boasts breadth and depth. After six years as Head of Middle School in a large metropolitan State school and a regional responsibility for girls in education, she was appointed to St Peter’s College in Adelaide where her leadership roles included Head of Da Costa House and Master in Charge of Athletics.

Following four years as Head of Senior School at Annesley College, she was tasked with creating a new sustainable, educational concept for the Annesley site. In 2012, Cherylyn became founding Principal of Annesley Junior School. In a highly competitive educational environment, Cherylyn’s inspirational vision for a future-focused education that nurtures learner inquiry, student agency and authentic learning drew teachers and families to Annesley, with the reimagined school continuing to grow. A highlight was the World Class Learners’ Project led by Professor Yong Zhao that saw the pedagogical foundation laid for the Innovation Station, providing a dedicated space to create and develop STEAM (Science Technology Engineering Arts Maths) skills.

In 2017, Cherylyn was appointed Principal of Leibler Yavneh College in Melbourne, an ELC to Year 12 Jewish school of 750 students. She was able to inspire the staff with a clearly articulated vision to improve the school’s State VCE ranking from the mid 20s to 7th place in 2021. Cherylyn also led the introduction of a student wellbeing program and a range of popular STEAM subjects. She was appointed as the first non-Jewish President of the Association of Jewish Principals, and was selected to participate in the inaugural Independent Schools Victoria Principals’ Learning Academy in 2021, led by Professor Ethan Bernstein, Harvard Business School.

In 2022, Cherylyn was invited to join the School Improvement Team at Independent Schools Victoria as a Principal Consultant where she works closely with educational experts and the Principals of 25 independent schools in Melbourne, developing and executing future strategies.

Cherylyn has an abiding passion for the holistic and future-focused education of girls, and a strong belief in the important and unique role that committed school communities such as Saints Girls play in the lives of our children. She and her family are extremely excited about returning to their hometown of Adelaide, and we are equally as delighted to welcome them to the St Peter’s Girls’ community, with Cherylyn commencing her role in January.

Cherylyn says, ‘I was struck by the parallels between the Sisters’ courage in leaving England to sail to an unknown land along with their very modern educational philosophy prioritising creativity, the joy of learning and the ability to think for oneself, with the challenges we face almost 130 years on as we prepare students for an uncertain future. These core aspirations remain: the courage to innovate, the courage to take the lead in girls’ education, and the courage to provide Saints Girls with the 21st century skills and competencies to face the challenges of the future with confidence and compassion, leading lives of purpose and fulfilment. The Sisters’ dreams live on, and I feel honoured to be joining the community and the Saints Girls’ story.’

We once again thank Julia for her immense contribution and her continued leadership as she shares an expert handover with Cherylyn in the weeks ahead. We look forward to introducing Cherylyn to our wonderful community and can’t wait to see the legacy she will create as she leads the next chapter in our School’s remarkable history.

Jeremy Schultz
Chair, Board of Governors